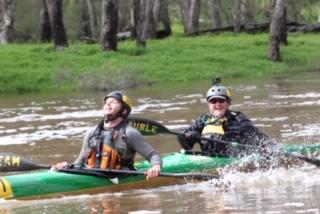 “It can be sedate and calm or it can be adventurous or crazy.”

Jane Liddle was never the sporty type, and found paddling as a way to get outside and get some exercise. From humble and inexperienced beginnings, Jane has fallen in love with paddle sport and achieved some excellent feats.

Women have always been underrepresented in sport, this is the perfect opportunity to Take the Plunge and show their strengths on the water. The Avon Descent is a mixed event, so if you have a team it is a great event for women and men to work together.

So why should women compete in the Avon Descent, or get into paddling?

Jane says the support of other women at her local kayaking club, Ascot Kayak Club has encouraged her to take up the sport and has also been a great way to make new friends. Paddling demands teamwork, and requires strong bonds to be formed for success on the water.

The teamwork of paddling has allowed Jane’s family to also participate together, “Two of my three adult children followed us into the sport and my third daughter Jenna is our awesome support crew on race weekend. We have all five family members actively involved in the club and I think that is amazing that we can do the one sport no matter what our different ages are.”

Jane describes paddling as being both meditative and high intensity. Not only is paddling a great way to make friends and get outside, but it is also a great form of exercise “It is a great whole body workout involving core, legs and arms, but at an emotional level it is relaxing and a fantastic way to be outdoors all year round.”

With the right training, practice and preparation, women can be just as capable as men in paddle races and are a force to be reckoned with in their own right.

Jane was encouraged to compete in the 2013 Avon Descent with her husband Peter by a friend and Avon Descent legend Terry Bolland. In that year, the greatest challenge was the water level. It was exceptionally low, with the kayak scraping along the bottom of the river in some points.

Jane felt the greatest achievement was simply finishing the race, and having the support of her husband. She competed again in the 2018 race with her son Michael. Unlike the 2013 race, the water levels were the highest they had ever been, and luck was not on her team’s side, as Michael was injured after capsizing on Day One.

Jane had experience up her sleeve, but those who were less experienced found some parts of the race to be very challenging. Each day is different on the water and you never know what the conditions could be like.

If you’re thinking about giving it a go, Liddle says the community is very helpful and welcoming.

“No matter how elite you are or whether you are just starting out there is always someone willing to help.”

Take the Plunge and enter the Avon Descent! 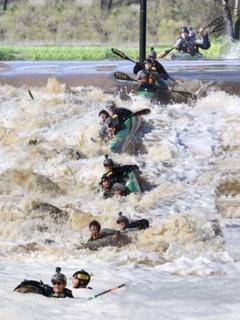 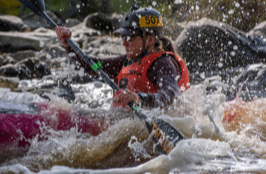