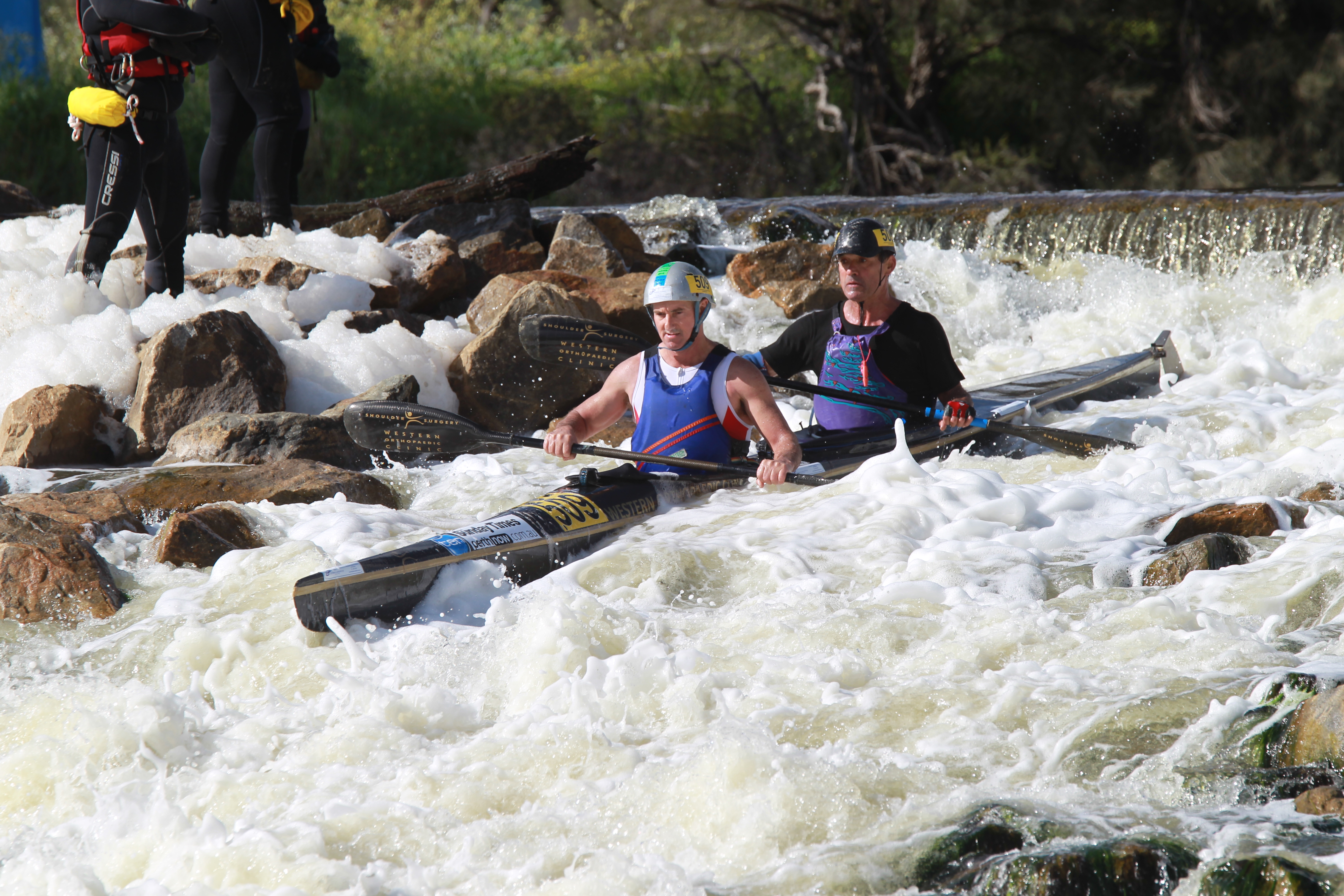 The importance of water levels – An expert interview with Darryl Long!

With all the wet weather lately, it seems perfectly natural to wonder how this year’s Avon Descent could be affected. After all, the race has been a WA institution for over forty years.  A two-day event spanning 124 kilometres mixing paddle and power craft held on the Avon and Swan Rivers. It hosts a strong community of dedicated athletes from all over the globe attracting worldwide press coverage. It’s kind of a big deal.

So what sort of water levels can one prepare for?

To get some expert insight, I went to someone who knows the course better than just about anyone. Thirteen-time Champion of the Avon Descent, veteran paddler, Darryl Long. Talking to a legend in any field can be a little intimidating, but Darryl put me at ease right away with a confident, open, and easy-going attitude. He has absolutely nothing to prove and he knows it.

Darryl first became curious about paddling as a teen after his younger brother got involved first. Up until that point, he had only messed around with open Canadian canoes at his grandparent’s house near Mandurah. One time while his brother was away at camp, he used his boat to give serious paddling a try. He immediately knew he was good at it. At age 17, his first race was a 24-hour marathon where he paddled 202 km in 24 hours, winning the Junior Record outright. As naturals do, he found it very easy to race and win with very little training.

Thirteen Avon Descent titles later, the 54-year old hailing from Ashfield representing Ascot Kayaking Club, knows a thing or two about water levels. “Lower water levels means more time. When the water levels are higher the river has more momentum and times are faster. In 1981 the weather provided the ability to break the record, but the next year in 1982 the water levels were so low people were injuring themselves out of exhaustion. In 83’ it was all wet again and the highest I’ve ever encountered reaching 7.6 meters” recalls Darryl.

“I did my slowest times in 2006 because the water was only .32 of a meter deep. In 2010 the water only got to .28 of a meter, but I was 41 minutes faster because I was fitter.” That year, 500 paddlers began the race and 250 finished. Devastatingly, 42 power dinghies started and only 3 finished. “The water was not deep enough for the power boats to work and they were damaging their gear. The challenge is that you never know what you are going up against” Darryl explained.

At the time of this interview, water levels are higher than they have been many times over the years during the Avon Descent, but will it remain that way? Darryl pointed out that for the water to remain high there would have to be consistent rainfall in specific areas for several weeks leading up to the event. Sporadic, torrential downpours followed by dry spells such as we have been seeing, however unseasonable, will only make the water recede and dry up fairly quickly.

Two years ago experts predicted “no water” for the Avon Descent. Not low water, but no water. As in.. die hard, committed competitors literally carrying their boats down the course… no water. Then, like a gift from white water gods, it rained. It rained the Tuesday, Wednesday, and Thursday before the race and brought the water levels up to where it was actually quite race-worthy.

“Most seasoned competitors have never seen water levels above a couple of meters here in WA” according to Darryl. The highest he ever encountered in his lifetime was 7.6 meters in the race in 83’.  Officials actually considered cancelling the race for safety reasons, but by race day levels went down enough to be considered completely safe. In 1996 while competing in the Wild Water Worlds Championship in Landeck, Austria, Darryl remembers “violent, raging whitewater and landslides that changed the course daily. They had to hold your boat while you got in, and then had to hand it down a line from person to person until they said GO! There was no way to paddle upstream because the water was so fast.” He went on to emphasise that the stress this put on a competitor was huge because “you make one mistake and it’s over. It can all be over very fast.”

So be careful for what you wish for. Higher water levels do not necessarily make for a more advantageous result or a more rewarding race experience. Not necessarily.

The Fish River Marathon is held in Cradock, South Africa each year. It is dam controlled so the levels are exactly the same every single year. The rapids are identical.  One year a tree fell down and some top competitors clipped the tree just because it was different than what they were used to. It seems predictability is a good way to learn, but a set course like the Fish River lacks the unexpected challenges inherent in nature that the Avon Descent provides.

Darryl thinks there is so much anticipation in trying to predict the weather in events like this because there is so much preparation required in advance for such a complicated two-day event. Predicted low water levels means lower entry numbers, which means organisers have to cut costs and perhaps in the end, for no reason.

This brings me to the conclusion I suspected all along and Darryl confirmed; the beauty of the Avon Descent actually lies in its unpredictability and the ability of the challengers to face anything that the river throws their way.

The Avon Descent is a marathon. It’s very physically demanding particularly on the paddlers. Its average is 3 ½ hours for the first day and 5 for the second day. Because you are down on the flat by the time you are exhausted, you’ve finished the white water but you still have kilometres to paddle”. The wind can be a factor as well. Last year’s headwind was dealt with using GPS to gauge how fast they were going against the wind or if they were better off paddling closer to the bank. If you are paddling double, sometimes it’s better to be right in the wind as the boat is weighed down more. If you are single, you can get knocked around more. “My ultimate year when I did singles in 1983 was 3 hours and 26 minutes on day one and 4 hours 41 minutes on day two with a total of 7:56 in 3.5 meters of water” added Darryl. A very impressive time, indeed.

Darryl’s advice for any competitor with regard to the water level is to be prepared for anything. In paddling, the emphasis is more on your own physical ability and how fit you are can make all the difference in your time and placing. With power, it’s a matter of knowing exactly where the best line lies in the river from top to bottom. Many power boaters must learn the river by paddling since power boating is not permitted on the Avon course during the year. The race is their one chance to do it. Top competitors in the power boat category have been doing it for multiple years, so success greatly lies in experience.

In paddling, Darryl suggests getting out and training regularly for fitness and speed so you can paddle hour after hour. “Even in good water levels, it’s still going to be a lot of hours and a highly skilled person can still run out of steam. Training to win the Avon Descent is extremely time-consuming.  Two hours a day, five days a week, week in and week out.”

On racing to finish, Darryl emphasised “just completing the course is a massive achievement. The buzz people get just from completing is impressive, to say the least. It’s a different mentality but still an achievement and you must be fit just to finish.”

Last year, Darryl and Paul Genovesi partnered up in the double kayak category. The duo hadn’t competed as a team for twenty years and finished 6th in 2016. In 1996 they won the double kayak by an astonishing lead of 1 hour and 8 minutes. As for Darryl’s plans for this year, he’s not sure just yet. He is waiting to hear from Paul about what his plans are and is playing it by ear. In the very spirit of the Avon Descent, whether it is changing water levels or which category he will be competing in, I get the feeling Darryl Long will be ready for anything.

The Avon Descent is on the 5th  and 6th  of August and encourages anyone to push their limits by participating. Find out more on www.avondescent.com.au  – Don’t miss out – entries open May 14th.